I had an excellent time in London with Jack and Dan last Sunday. We watched the Autism-friendly performance of The Lion King at the Lyceum Theatre.

I felt so special attending this unique show. Autistic people have to adapt to ‘fit-in’ to this world every day. What a complete delight to experience something adapted for us. The Disney Theatrical Group even sent us some additional information ahead of the show, in order to prepare for our visit, including a video visual story and clear information about the volunteers, adaptions and relaxed areas.

We waited outside in the fresh-air, before finding our seats in the busy auditorium.

A man called Santiago checked our tickets on the door.

The theatre was beautifully-grand and I had looked at pictures of it online, because I hadn’t been there before, and I wanted to be prepared. It was more beautiful in real life of course. Our seats were splendid and close to the stage. As we sat down together, I had no worries. This was an extraordinary feeling for me to have in a public-place, surrounded by people. My body was relaxed and being itself: the noises from the people around me gave me comfort and told me that they were all being themselves too.

Hakuna Matata for sure.

I realised that in here, I wouldn’t have to apologise for being me.

All of the cast, crew and theatre staff had received Autism training. There were people dotted-around everywhere from The NAS and Disney, wearing clear t-shirts. They were trained-and-ready to help if we needed anything before, during, or after the performance, and they all looked so eagerly-friendly.

There were designated ‘chill-out areas’ in quiet-zones, to be used if we needed a break. Adaptions had been made in the toilets. Theatre staff held-up visual instructions on enormous signs telling us to switch-off-our-phones, and that videos and photographs are prohibited. I wished that instructions could always be given like this, so that if you don’t quite understand, or you have too-much-information to process, or big announcements are too loud, you don’t have to worry about asking somebody to say an instruction again.

It put me at ease that I was in the right place, doing the right things, independently.

Just before the show was about to start, the auditorium door at the right-side of the stage opened, and two characters walked in.

It was Scar and Rafiki.

I wondered if my eyes were tricking me.

Scar and Rafiki walked up and down the aisles in the stalls, shaking people’s hands. The ushers and theatre staff were telling us to look and people were pointing.  Their make-up and detailed costumes were breath-taking.

I was so shocked.

They walked up onto the stage and talked to us all. Scar, in his magnificent voice, welcomed us. He explained that his name is really George Asprey, and that Scar is the character he plays. He told us that he is not really bad, just misunderstood, and that is sometimes how I feel! It made me laugh. It made me relax. It made me wish that the police officers with the guns in Blood Brothers had done that too, to remind us all that it is just acting.

Scar’s speech was clear and caring. He told us that this is the fifth Autism-friendly performance The Lion King has done, and that they are honoured to do it. He introduced Rafiki, and he told us that she will be the first character we will meet when the show starts. I felt grateful to him for telling me what to expect next.

It amused me that his most famous song is ‘Be Prepared,’ and he was the one preparing us…

The house-lights dimmed, but remained on. This meant I could still see what was going on around me, and remember that I was sat in-between my two friends. The noise from the audience continued as Rafiki sang Nants ingonymama bagithi Baba, telling us in her Zulu language that a lion is coming.

I glanced over my shoulder as the saffron-sun rose over Pride Rock.

I could hear non-verbal autistic adults and children squealing repetitively, communicating their wonder and overload. There were people everywhere with ear-defenders-of-many-colours. Nobody was trying to quieten their physical or verbal stimming. For once our differences were socially acceptable. There was hand-flapping, wailing, clapping, spinning, rocking, intermittent explosive screams of joy and overwhelm. There were autistic adults clutching comforters. ‘Autism parents’ were praising, reassuring, explaining. Everyone was free and welcome. People were making their own noises to drown-out the new, unfamiliar ones. People were making friends. A teenage boy walked past me wearing a t-shirt that said: I just really like musicals. Every time a song finished, the little boy sitting in front of us would throw his arms around his mum’s neck and kiss her on-the-lips.

No-one was going to judge any-one for being ‘different’ or ‘disruptive’.

I did not have to sit and struggle because the lights were too bright or because it was too loud. The National Autistic Society had worked in tandem with the show to assess all of these things, and adjust them for an autistic audience. I did not have to worry that there would be unexpected pyrotechnics, explosions and strobe lighting. I would have felt able to leave the auditorium for a break without feeling weird, isolated, embarrassed, judged, weak, guilty, paranoid or stupid, knowing that somebody would have helped me.

There was so much that I loved.

I loved He Lives In You, because it reminded me of when I sang it in Love Soul Choir: it reminded me of the passion I had, when I taught it to the children in singing assemblies, and it reminded me of all the people that live in me. Can You Feel the Love Tonight was so believably-romantic. Nala singing Shadowlands is one of the best things I have ever seen live. I watched every intricate piece of lioness-choreography, and noticed every costume-detail. Zazu made me laugh the most. The Stampede scene is special to me because of a piece I choreographed for my dancers. The animals that walked down the aisles took-my-breath-away: I didn’t know if I was afraid or in awe of the elephants, the giraffes, the antelopes, the birds. I just wanted to know how the costumes worked.

My favourite character was Scar.

The Theatre is my favourite place in the world. I love to see shows as much as I can, but I am normally the biggest actor of them all: suppressing stims; masking my sensory difficulties; ignoring my boiling-quiet autistic-anxiety. It physically hurts to mask it all the time, and you can’t take-off the mask like the cast can.

I only felt pride there, in the Lyceum Theatre.

I felt proud of myself and the other autistic people: proud of our wonderful, patient friends and families; proud of the theatre cast, crew and staff; proud of Disney and proud of Chris Pike and the National Autistic Society for making the theatre experience magical and accessible for people with various autistic needs and learning disabilities.

From where I sat, it was a roaring-success.

Thank you Jack, for buying the ticket for me for Christmas.

It was absolutely fantastic. 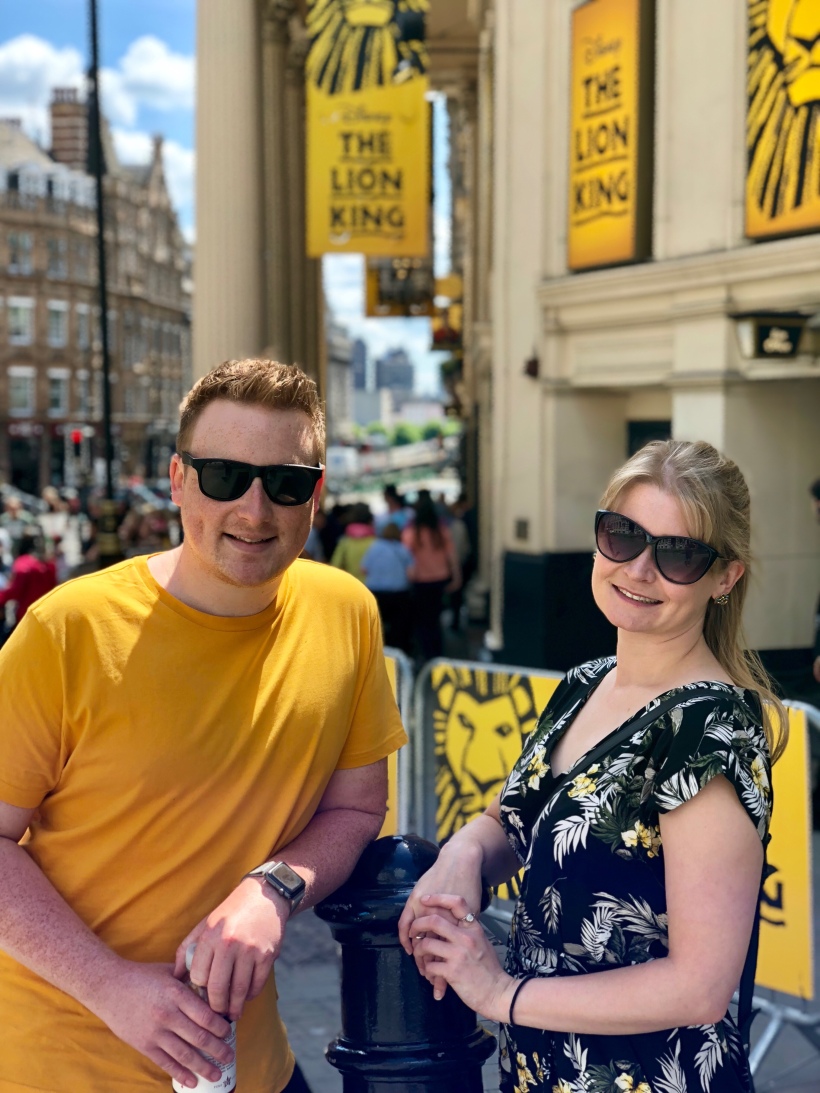 One thought on “The Lion King: Autism-Friendly Performance.”